This feature is part of a Women’s Lives Women’s Voices series by Historian Dr Angela Byrne from Donegal, who pays tribute to Donegal’s Historical women. 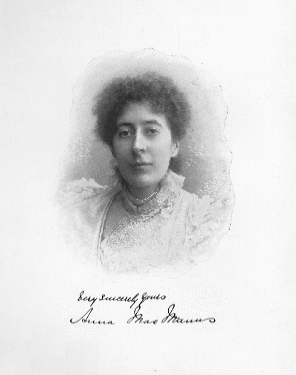 Ethna Carbery, poet, writer and journalist, was born Anna Johnston in Ballymena on 3 December 1866. She was just fifteen when she first published, and would go on to publish many poems and short stories in Irish and American magazines and periodicals, often under the pseudonym – and name by which she is known best – Ethna Carbery.

Carbery was an active nationalist. In 1896, she and her friend Alice Milligan founded the republican magazine Shan Van Vocht. Seumas MacManus later testified, in a document held at the Bureau of Military History, that Carbery and Milligan “did all the work of the paper. Not only did they edit it, but they wrote a great part of it and […] despatched [sic] it to every subscriber throughout the world.”

In 1898, Carbery participated in a national lecture tour with Maud Gonne to mark the centenary of the 1798 rebellion. She wrote patriotic plays that were performed all over the country, and the still-popular ballad, Roddy McCorley. She was an active member of Inghinidhe na hÉireann from its foundation in 1900. Bulmer Hobson later recalled that he was “tremendously influenced” by her, and that she introduced him to Douglas Hyde and Maud Gonne. 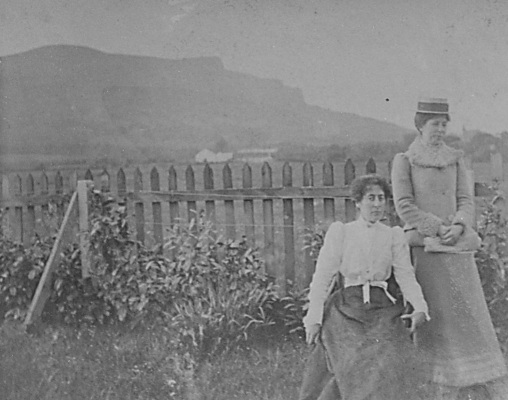 Anna Johnston seated at the back of the family home, Antrim Road, Belfast. Beside her is her sister Marguerite

In August 1901, Carbery married the Mountcharles poet and folklorist Seumas MacManus and moved with him to Revlin House, near Donegal Town. Their marriage was short – she died of gastritis on 2 April 1902, aged just 36, and was buried in Frosses. She spent only a year of her life in Donegal, but her love of the county is clear in her poetry.

Seumas edited and published her remaining poems as The Four Winds of Eirinn later in 1902. The book was hugely popular and went through fifteen editions by 1905. He also edited and published two collections of her stories: The Passionate Hearts (1903) and In the Celtic Past (1904). Frances Clarke, her biographer, states that in the years after her death, Carbery was “possibly the most widely read poet in Ireland.” She was also known internationally – for example, the Southern Cross newspaper of Buenos Aires published her obituary.

On her death, the Freeman’s Journal described her as a “woman-writer of exceptional talent.” Despite this praise, the Kerryman newspaper noted in September 1904, having published a review of In the Celtic Past, that some readers had asked, “Who was Ethna Carbery?” Then, as now, it seems, talented and even popular women writers could find themselves struggling for recognition. In 2002, the highly-regarded Field Day series published an anthology of Irish women’s writing, including extracts by Carbery and her friend Alice Milligan.

The book was intended to redress the under-representation of women writers in the first three volumes of the series. This was an important move, signalling growing recognition of women’s contributions to Ireland’s long literary tradition. However, progress has been slow. In 2016, the grassroots movement Waking the Feminists emerged as a response to the Abbey Theatre’s male-dominated programme – a theatre which was co-founded by a woman, Lady Gregory. Waking the Feminists had far-reaching effects, helping to expose the marginalisation of women in the arts, media and public life more widely.

This process continues, with more critical appraisals of cultural events like ‘Dublin: One City, One Book’. The festival, established in 2006, encourages everyone to read the same book during the month of April. Sinéad Gleeson’s anthology of Irish women writers, The Long Gaze Back (published in 2015) has been selected as the featured book for 2018 – only the second female-authored title to have featured in the festival’s 13 years.

Neither Ethna Carbery nor Alice Milligan’s short stories made it into The Long Gaze Back, but both are included in the follow-up volume, The Glass Shore (published in 2016 and also edited by Sinéad Gleeson). Ethna Carbery would likely be pleased at this rediscovery of her work, and at the recent re-ignition of interest and appreciation for the place of women writers in our rich literary heritage.